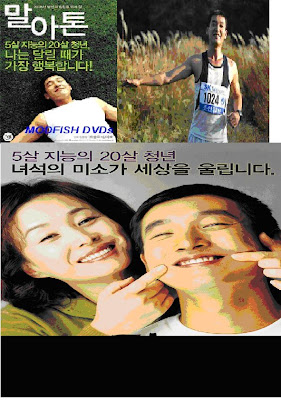 
As the hero is disabled, “Running Boy - Marathon,” which deals with Bae Hyeong-jin and the Chuncheon Marathon, was an unlikely success story. But word of mouth appears to have helped propel the film into record figures, with viewers gripped by the moving drama of an autistic man who uses the Marathon to score a victory for the human spirit.

Among the film’s many strong points is a powerful story that conveys the subtleties of the internal conflict suffered by Bae’s mother, besides solid production values, fine acting by Cho Seung-woo and Kim Mi-Sook, and an impressive realism, with the film shot on location at the site of last year’s Chuncheon Marathon. The film was unique in attracting moviegoers of all ages, from preschool children to the elderly - not unlike the 2002 film “The Way Home”, which drew over 4 million viewers.

Seok Myeong-hong, president of “Running Boy - Marathon” production company Cineline2, said many parents were taking young children to see the film, and mothers and fathers had left over 1,500 messages on the film’s webpage praising the picture. “I saw the film five times in five days,” one message read, while another said, “The movie made my daughter cry.”

In one of the highlights of the Korean film "Running Boy" (the original Korean title is "Marathon"), there is a scene in which an autistic boy is surrounded by a crowd of adults on a subway platform. They're confronting the boy because he tried to touch a woman; they assume the worst, of course, but he only touched her because she was wearing a skirt with a zebra pattern, and zebras are his favorite animal. The camera circles the boy, who, though standing in a crowd, is clearly different from the others.

Toward the end of the film, the same boy is running in a Marathon. At first we only see the boy; then the camera slowly pulls back until the boy disappears into the crowd of hundreds of other runners. The contrast between these two scenes add up to a poignant statement about the meaning of disability in our society.

"Running Boy" is a movie about disability, and about the lack of tolerance society has for people who are different. Based on the true story of an autistic boy who completed the Chuncheon Marathon four years ago, the film's protagonist is 20-year old Cho-won (played by Jo Seung-woo), who was diagnosed with autism at the age of five. His mother, played by Kim Mi-Sook, is a major character in the film, vividly illustrating the hardships experienced by families living with autistic people.

Yet "Running Boy" is probably one of the first Korean films backed with solid acting to treat the subject of mental disability without falling into the trap of romanticizing it, or resorting to a "victim" mentality. Perhaps its success is owed in part to the witty dialogue, a pleasurable surprise for audiences who are not used to that kind of humor in Korean films dealing with disability. Throughout the film, the boy's unusual verbal expressions become cheerful ways of interacting with others.

The film also honestly depicts what the disability does to Cho-won's family. His mother is determined to make him finish a Marathon in less than three hours; while this is for her son's good, the film is also frank about how her own personal ambitions are motivating her as well. Cho-won's exhausted father, who is often intolerant toward his son, is depicted as neither evil nor a saint; the focus is mostly on his dilemmas. Overall, the film refrains from judging any of its characters; the audience will likely suspend judgment, too. They'll also feel a sense of hope, and perhaps some guilt. But the film's greatest success may be in what it's done for people in Korea who are living with mental disabilities, who finally have a film that's broken the silence about the subject.

"Running Boy" has become the most popular movie in the country (according to the Daum Internet portal), and has already had the positive effect of spreading awareness about the issue through media coverage. That in itself is a credit to the people who made the movie.
Posted by @FaD at 11:01 PM 5 comments 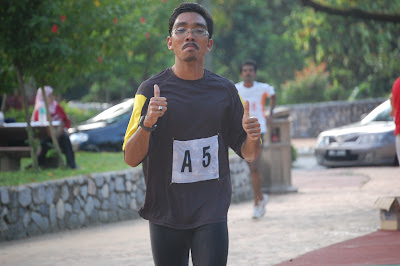 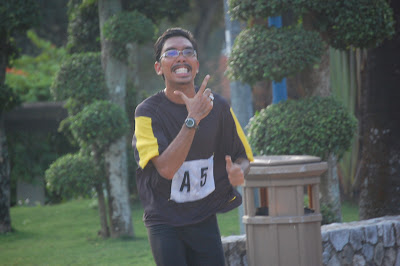 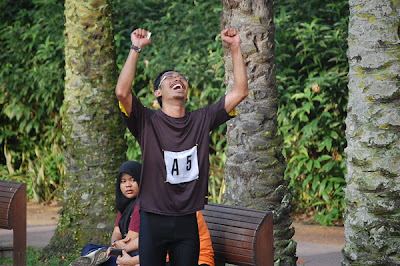 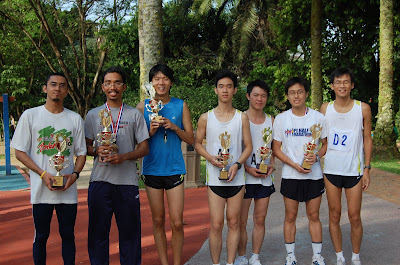 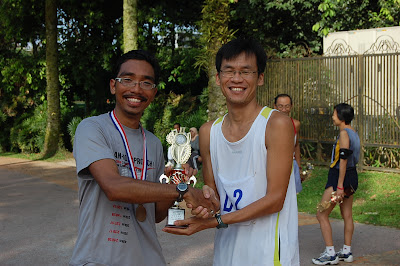 this is the first race for this year and i got throphy!!wow!!what a lucky i am in a new year..haha.

early in the morning..drive to um take my fren fazli and then go to the lake garden..find the place and meet all familiar face runner..talk-talk and go stretching for about 10 minute..then the speaker man give a briefly instruction about the race.

Broom broom..these are very nervous race because all the runner are all top-top one..so I need to stick to my plan to go through this run..so the spirit is there then it depends on leg to pia all with my heart..hehe..

I start the race with the comfortable pace but im worry because im quite far from the other..so I start to catchup and get up the pace…my leg still not ngam with this new adizero...rase cam keras je..huhu..

So I run and give support to all the runner that I sayur2..hehe..i also been sayur by the top-top runner like murali, jasni, naresh and guna..salute to them la cause do sub 1 hour fir 13.8 k..fuyoo..

Run run run till I cannot remember the lap..haha..lucky I found adan and ask him..and at the last 100m im pia all out to the finish line as I love to do it..hehe..reach the finish line and suddenly the volunteer give me the card and guess what..i got 6 places in my category..if u were there now u know why im shouting there..haha..

im still need train hard to get better timing and can get into all the elite runner..overall it’s a very good race and best organizer from the Pacemaker!
Posted by @FaD at 8:59 PM 2 comments

@FaD
My name is Fadhli Fadzil. I live in Shah Alam, Selangor Malaysia. I love photography and sports such as running, outdoor activities etc..I do enjoy mingle with people very much and that's why I also been as a Wedding Photographer; capturing moments a lots!